The origin of Naadam festival is closely related to the history and culture of the country. Mongolians have abundant military history; especially, it is renowned for its conquest, great Emperors and the warriors. The core reason of the success and unity of legendary Chinggis (Genghis) Khan’s army was its sophisticated structure. The whole army was composed of groups of 10 soldiers and each group was led by a selected man.
The leader of groups chose their warriors based on their strength, movement and flexibility revealed in their wrestling skills, their eye-sight and hand-orientation shown in their spear-throw and archery skills, their patience and bravery exposed in their horse training and horse racing skills during public competitions. Furthermore, before and after major battles, the three manly sports - wrestling, horserace and archery - were exercised as an organized event, which later adopted its present name - Naadam.
However, during the double-century ruling of Qing Dynasty (from the late 17th century to the early 20th century), Manchu leaders applied the rule that no monks were allowed to practice traditional sports like wrestling or archery. This is an example of how Manchu leaders pursued the policy to segregate the unity of Mongolians by decreasing the number of participants in mass events, namely Naadam, and subsequently setting barriers over Mongolian men to get physical training and form united action for independence. Fortunately, Mongolians managed to preserve their traditional sports by organizing mini-Naadam type events, including the wrestling, archery and horseracing, on various occasions like worshipping sacred areas, weddings, and religious rituals.
Consequently, later in the 1920s, Naadam started to take place as a nationwide celebration honouring the victory of the People’s Revolution and forming the independent nation of Mongolia. From that time, dominant image of Naadam has shifted from mass battle or physical training to national celebration.
Nowadays, it is celebrated as the largest celebration and a national holiday which officially lasts 3 days. Because the event articulates traditional arts and sports in harmony, it is celebrated in a festival manner.  The major festival, enjoying the presence of the State heads – the President, Prime Minister and the Parliament speaker, as well as the leading artists and performers, is held in the second week of July in Ulaanbaatar. However, some regions, provinces and villages set up their festival dates differently. Almost everyone is dressed in amazingly colorful, and comprehensive traditional costumes called ‘dell’ during the festival.
During the Naadam festival, in addition to the three main games – archery, horserace and wrestling, ankle-bone shooting competition is annually held in the sideline. Khuushuur, fried pancake with meat, is also inseparable part of the festival, and thus the favourite food of the festival crowd. 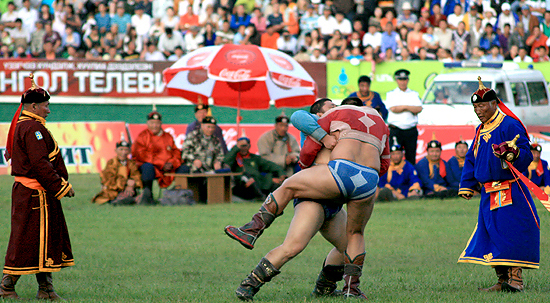 Wrestling – a unique combination of traditional sports and cultural elements - is one of the three main sports of the Naadam Festival in Mongolia.  Wrestling also has thousands of years of historical development in Mongolia.
According to an ancient rock-carving, dated back to the Bronze Age (7000-11000BC), portraying a wrestling festivity found in Ulziit soum of Dundgobi province, wrestling has well been exercised in the territory of Mongolia for over 7000 years. With regard to its vast open territory and nomadic culture, Mongolian wrestling has certain uniqueness such as no weight or field limitation, expanded time and countless tricks.
Throughout its history, Mongolian wrestling has been developed in three main streams: Mongolian bull wrestling, Khalkh wrestling, and Inner Mongolian wrestling. They have similarities in the wrestlers’ costumes, wrestling dances, rituals of judges and attendants and the wrestling field. However, they are differentiated in the rules of winning/losing. Touching a head, knees, or elbows are counted as losing in the Khalkh wrestling, for instance, while touching back is counted as losing in the Mongolian bull wrestling.

Home of the world’s longest and (toughest) horse race - “Mongol derby”, which is officially claimed in the World Guinness Records, – Mongolia is the land of nomadic culture, vast open space and of course, horses!

In Mongolia, most people learn to ride horses when they are like 5. Mongolian horses are relatively stubby, but strong as they are trained at young age and used for transportation, sustenance, companionship and racing.

Mongolians enjoy horse racing throughout the year. However the most extended and the exciting one happens during the Naadam Festival. During the festival, participating horses are divided into six categories based on their ages. Distance of the race varies in each category: two-year-old horses race for 10-12 km (6-7,5 miles), for instance, stallions race for 23 km (14,5 miles) on average, and seven-year-old ones race for 25-26 km (15,5-16 miles). Moreover, though, the distance varies from race to race depending on the surface of the race field in different locations.

Horse jockeys are usually between 5 and 13. Due to the lengthy distance of the horseracing, jockeys are preferred to be light, yet experienced. During the race, jockeys not only ride horses, but also they are responsible for cherishing their horses with a special song called “giingo” and raising their spirits.

With no doubt, several months before the race, both horses and jockeys go through intense training. Especially the horses are given a special diet and treated with tenderness during the said period. In the race, horses and their jockeys coming in first five are rewarded and revered. Like the winning wrestlers, winning horses are given titles like “tymnii eh” or the leader of ten thousand. Horse trainers, whose horses perform exceptional in consecutive races, are also given special honors like “Leading trainer”, or “National famous trainer”. 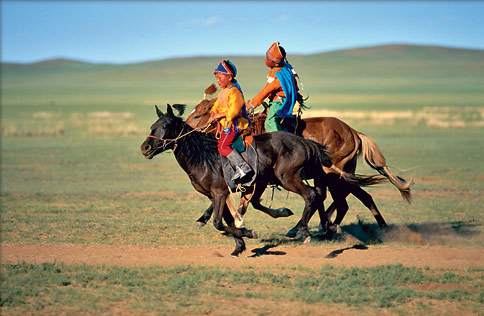 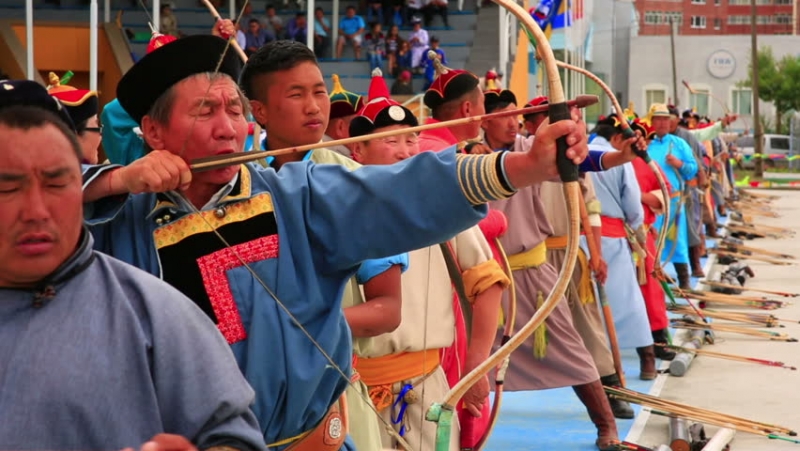 Due to its traditional lifestyle, archery has been exercised among Mongolians for centuries. According to some sources, its primitive version was originated during the New Stone Age. Ancient people used their version of bows and arrows for hunting and then later in the history, these tools started to be used as a weapon during battles. Around the 11th century, men were encouraged to practice archery to be prepared for battles; and therefore, up to now, archery has been able to be developed as sports.